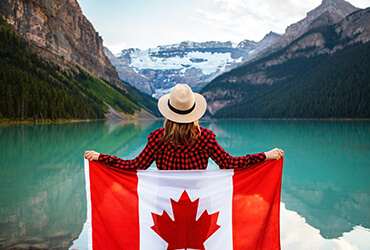 Why Study In Canada?

There is limitless opportunity and potential to be found in Canada's fast growing and industrialized economy. As one among the wealthy countries, study in Canada also offers the highest standard of living while diminishing taxes and consolidating their economy with a 2.3% inflation rate. Canada is a multi-ethnic country with an ironic diverse culture. Canadians have adopted multiculturism as their national policy. Canada also appreciate immigrants and minorities to embrace onto their cultures and represent their nationality with freedom in education and the work force.

There are different types of qualifications offered by various institutions of Canada.

Canada invests adequate funds on the education to benefit their citizens than any other nation. Primary and secondary education are free along with post-secondary studies. Canadian colleges and universities are recognized throughout the world for their superior quality. Canada also holds the highest proportion of college graduates at 51% and therefore it is among the most educated countries in the world. One of the major reasons behind Canada's popularity among students is its affordable quality education. The Canadian government spends generously on higher education and is among the top three countries to spend per capital on post-secondary education.

Capital of Ontario and the most populous city in Canada, with a population of 2,731,571 in 2016. A global city, Toronto is a centre of business, finance, arts, and culture, and is recognized as one of the most multicultural and cosmopolitan cities in the world. The city is home to the Toronto Stock Exchange, the headquarters of Canada's five largest banks & the headquarters of many large Canadian and multinational corporations. The Greater Toronto Area (GTA) consists of 25 incorporated municipalities within central city of Toronto.

Vancouver, BC is a coastal city on the southwest corner of Canada. Vancouver is consistently named as one of the top five worldwide cities for living and quality of life. With its scenic views, mild climate, and friendly people, Vancouver is known around the world as both a popular tourist attraction and one of the best places to live. Vancouver is also one of the most ethnically and linguistically diverse cities in Canada with 52 percent of the population speaking a first language other than English.

Calgary is a city in the Canadian province of Alberta. The city had a population of 1,239,220 in 2016, making it Alberta's largest city and Canada's largest municipality. The economy of Calgary includes activity in the energy, financial services, film and television, transportation and logistics, technology, manufacturing, aerospace, health and wellness, retail, and tourism sectors. The Calgary is home to the second-highest number of corporate head offices in Canada among the country's 800 largest corporations.

Montreal (French: Montréal) is the metropolis of the province of Quebec. Quebec City is the political capital but Montreal is the cultural and economic capital of Quebec. The second largest city in Canada, it is a city rich in culture and history and a well-deserved reputation as one of the liveliest cities in North America. Montreal is the second-largest French-speaking (as a mother language) city in the world, behind Paris. The population of Montreal is about 1.9 million. Montreal is sometimes referred to as The Paris of Canada.

Regina is the capital of Saskatchewan, Canada. The Royal Saskatchewan Museum has exhibits on Canada's Aboriginal peoples and native animals. Regina is a beautiful oasis on the prairies with a steadily growing population exceeding 200,000. Regina is known for its generous, friendly people and rich community pride. This welcoming prairie city has an abundance of parks, sports and recreational facilities, bicycle pathways, family attractions and an exceptional quality of life. within central city of Toronto & the 4 regional municipalities.

English Language proficiency is one compulsion that is required to be met to study in Canada. IELTS (International English Language Testing System) is generally taken by the students, to prove their English language proficiency to study in Canada. However, Canadian High Commission has a requirement of 6.0 bands in IELTS for an undergraduate degree with no band less than 6.0 issued in the past two years, and overall 6.5 bands with no band less than 6.0 are must for getting admission in post graduate degree in Canada. All Canadian Colleges and Universities accept the IELTS scorecard to analyse the ability of an applicant to read, write, speak and understand English. However, there are certain institutes and provinces which accept the Pearson / PTE academic language testing for admissions.

A post-graduation work permit cannot be valid for longer than the student's study program. The course duration must be a minimum of eight months in length. The PGWP allows international students graduating to gain Canadian work experience. In the long run, Canadian work experience gained through PGWP helps international graduates qualify for PR (permanent residence) in Canada through Express Entry.

You must include these documents with your application under Student Direct Scheme (SDS):

Stay updated with all the happenings at KIA Consultant by subscribing to our newsletter.